One of the most common issues found on a deck is more of a nuisance then anything. It’s not a leak and it’s not necessarily a hazard to the warranty or structure, but potentially could be an issue if left unattended. I’m talking about water puddles. 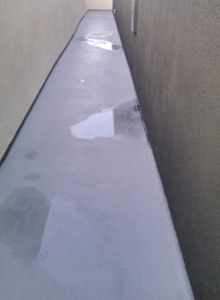 Many refer to this as ponding or bird baths, where water sits on the deck in a certain area for an extended amount of time. Because ponding is so common and found on almost any deck to some degree industry standards or tests have been adopted by many of the professionals. The testing method, or ‘rule of thumb’, is provided by the waterproofing manufacturer; however, it’s common that if the pond is active for more then 24 hours, this would be deemed a hazardous puddle and recommended for repair. Should the water dry within 24 hours, that means the water will not sit long enough to cause damage to the system functionally or cosmetically; therefore, it may not be recommended for repair which I will get into reasons for not wanting to repair later on. Brands like Dex-O-Tex use the 24 hour rule but also gauge the pond by depth and size to determine it’s risk rating. They say that if you put an American $0.25 quarter, heads up, if the water level is skim with the face or lower than the puddle may be ok; whereas, if the quarter is submerged then it may become an issue.

Our course, ponding can be caused by a multitude of things, but the most common attributions to ponding are: 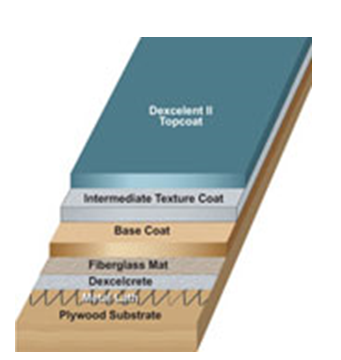 Of course there are many other reasons that could cause it but the majority of them is caused by the three (3) listed above.  The most common misconception is that the deck coating caused the ponding. Unless the applicator is hired to create the slope and / or cross slope with their material, which is additional steps to be taken, then it’s very difficult for a waterproof traffic coating to have low spots. This is because each layer of the material is troweled and screeded with something. For example, in speaking about a metal lath direct bond system such as Pli Dek, EnduroKote, WestCoat, Excellent Coatings and many others, the metal lath is stapled to the deck and then the cementicious body coat is troweled over the lath, using the thickness of the lath to screed against. This maintains an very accurate thickness for the system throughout. 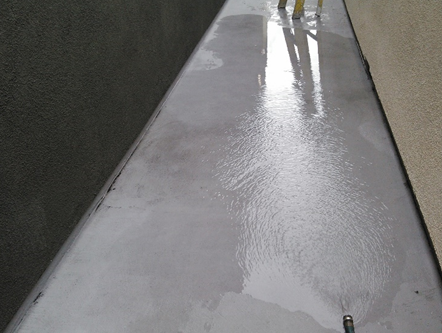 Unfortunately, a lot of times, low spots can not be found on a deck because the only way to test for low spots and get true results would be to put water on the deck after it’s been waterproofed with the construction coats. You can try putting water on the plywood but since the plywood is not waterproof, it can simply absorb a lot of the water and not show the real area of ponding, and many times contractors don’t want to get their plywood wet or at least limit it’s moisture exposure to prevent fungal growth and deterioration. Won’t a level tell you if you have low spots? Any good applicator will put levels on the deck prior to coating in a few areas to check for the 2% slope and to see if they can get “lucky” and find the one area on the deck that may be slightly bowed causing the pond. Yes, im being sarcastic, because its extremely unlikely that a low spot can be found just by using a level. A low spot may only be a small 1 ft by 1 ft area out of a 200, 300, 500 sq ft. deck so in reality that’s a 1 in 200 chance the spot will be found with a level. Note: the edge style of ponding can typically be determined using a level, but field ponding is a bit more difficult.

Now that the deck has been tested either pre-coating or after and bird baths have been found throughout the deck, so what to do now?

If the spots are identified prior to coating and circled, typically the applicator can fill them, screeding witn the surrounding system, all while installing their base coats.

Should they be found after the basecoats have been installed than typically the applicator can install the fill over the existing system assuming it has all other proper building components such as 2% slope and enough room to allow for the build up.

The majority of the time, a low spot can be filled to be removed or at least reduced in size. There are many times though that in order to fix the spot, the sloping must be reconfigured or increased all together which then starts the problems. When the scope becomes much greater then just a fil method, other components of the deck must be taken into consideration such as the door elevation of the deck, weep screed height off the deck, location of the drains, edges, etc. Basically, “does the deck even allow for the build up needed”? If not, it becomes a ‘best means and methods’ application where the applicator will do their best to accommodate the contractor by at least trying to reduce the size of the area and/or depth to some degree. This can be extremely tricky because if an applicator doesn’t know what they are doing, it’s likely the spot can be divided into two (2) spots, relocated to a different location on the deck, or even  made larger and deeper (Yes, I have seen applicators do this).

In sum, if you have a low spot on your deck, contact WICR Waterproofing & Decking for a free assessment on how to fix your waterproof deck. We can also help with the preconstruction design and development of the project to help prevent the issues from occurring in the first place. We are here to help you build your dream deck with less issues!