Much planning and care goes into waterproofing the foundations and basements of buildings as they are being built. The lot has already been excavated, and all subterranean or below-grade walls can be easily accessed to install waterproofing on the exterior wall. The exterior wall, in these cases, is called the Positive-side. The positive side refers to the side that actually come in contact with water pressure.

Sometimes, we get called upon to waterproof a basement or subterranean, concrete parking garage that leaking…either the waterproofing was performed incorrectly when the building was being built, or events may have occurred after the building was built that compromised the waterproofing system (for example, earthquake, foundation crack, soil shifting, etc.). In these cases, it is entirely cost-prohibitive to excavate the surrounding land (including landscaping) to repair and waterproof on the exterior. Thus, we rely on what is known as Negative-side waterproofing: waterproofing from the inside walls instead of the outside.

Advancements in waterproofing technology have made negative-side waterproofing a reliable and highly-effective methodology. Most systems involve hydrophobic polyurethanes that literally repel and drive out water, curing quickly to form a waterproof seal. The polymers are extremely durable, and many are environmentally friendly.

While all of the above sounds easy, the process requires much training and planning. To begin with, the walls must be X-rayed in order to map out any pipes or conduit located behind the walls before any drilling occurs.

In the video below, you can see our crew working on a 10,500 sq. ft. underground parking garage. The garage had been leaking and flooding for many years, since the building was originally built. We were told that the builder was denied permits to install a proper drainage system, which was necessary due to the location in a high water table area. Rather than finding an alternative solution, the parking garage was built with no drainage or waterproofing system. This affected both the residents and the commercial businesses who rented at that location.

You can see where the concrete walls had been marked to show results from the X-ray process. Drill holes were then marked after consulting with the manufacturer, De Neef. The De Neef Cut product was used on the walls, and the De Neef SLV product was used in the floors and joints. We had custom drill bits made to the precise depth, for optimum coverage.

The video also gives an idea of how much pressure had built up inside the concrete walls…we would drill into an area, and have to stand back as water rushed out of the drill hole. Thankfully, the De Neef product does a remarkable job literally pushing water out, and replacing it with the hydrophobic polymer.

There are actually only a handful of waterproofing contractors that perform negative side basement or parking garage waterproofing, perhaps due to the amount of specialized training and product knowledge involved, combined with the fact that these types of jobs only make up about 10% of our workload. We are proud to offer this service, which saves property owners the extreme expense of excavating to waterproof from the outside. 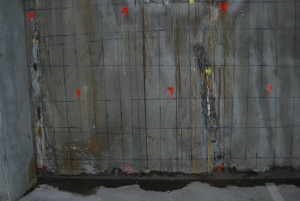 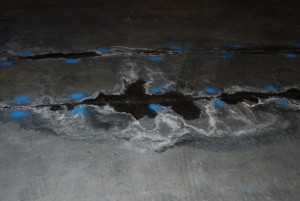 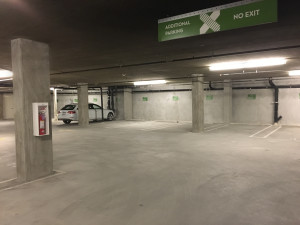 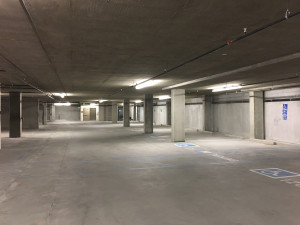