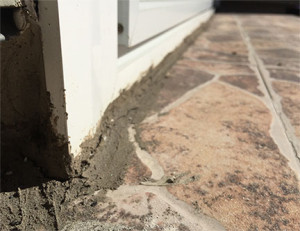 Decks were never originally designed for tile…elevations at the doors and weep screed are set at specific heights to keep water away from potential leak areas. Tiling over the deck raises the surface height, interrupting the slope required for waterproofing and guaranteeing that water will accumulate where the deck meets walls, rails and doorways. In some cases, we’ve seen water flood in through doorways at the first rain after a homeowner unknowingly tiled over their deck.

Tiling significantly increases the weight of the deck; decks were not designed for the weight load of tile and underlayment. Additionally, most do-it-yourselfers or untrained handymen fail to comply with proper Slope to Drain standards: the installation of tile must slope a minimum of ¼ inch per foot. This will assist gravity in removing most of the moisture away from the installation. Thinset coverage must be no less than 95%, and less than 95% coverage will inevitably result in failure.

Expansion joints must be installed at all abutting walls, and every 8-12 ft in each direction (according the Tile Council of North America). This allows for proper expansion and contraction of the materials, since wood, metal, mortar bed and tile all expand at different rates. The waterproof membrane needs to have an anti-fracture rating to allow for movement as well.

If these guidelines are not followed, failure of the deck system is imminent. When the deck fails, there is often no warning, as the damage happens below the surface. The best defense against deck failure is routine maintenance and inspection (every 3 years) by a manufacturer-certified waterproofing company.